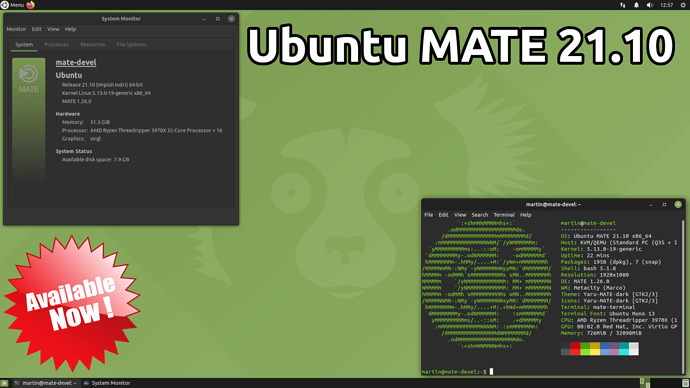 Ubuntu MATE 21.10 is available now! This release is faster and leaner

thanks to optimisations in MATE Desktop 1.26

The significant change in Ubuntu MATE 21.10 is the introduction of MATE Desktop 1.26.0 ✨ which was 18 months in the making. Thanks to the optimisations in MA...

I just upgraded mine to 21.10 last week, and it works fine except one major app. Well, I had another app but I found an installation that works fine for that one. However, Kodi does not work with 21.10! I really would like to get it installed, anyone know the status of Kodi for Arm64 that works with 21.10 on the Raspberry PI 4?

Thanks for this notice. Do I need to download a new iso and install it, or is it easy to upgrade to it?

Where can I find the ARM version?

Why are you guys still using the Marco compositor? It's junk! So far on every install I've done with Ubuntu MATE versions that use Marco, I've had to remove Marco and use another window compositor because Marco wreaks havoc with too many apps! Marco DOES NOT properly handle transparencies or OSD displays such as in VLC. The best compositor I've found so far that has the least bugs and least impact on desktop functionality is Compton! Please stop using Marco.

Please let me know when the latest release of Ubuntu MATE will support 32 bit computers of which I have 3 running under UM 18.04. I feel abandoned.

Ubuntu has stopped 32bit ISOs. If you want to keep your 32bit computers running with up to date Linux I would suggest you consider moving them to MX Linux, which has 32bit ISOs as far as I know. By the way, if you can wait a little longer a new release is due before the end of the year.

Thank you for your reply to my whine. It is very much appreciated.

I often wonder how long it may take for the developers of Ubuntu MATE to realize how many users of 32 bit computers they have decided to cast aside. Sad.

Until you can fix the accessibility issues found in the last two releases, I won't be installing it anytime soon.

I often wonder how long it may take for the developers of Ubuntu MATE to realize how many users of 32 bit computers they have decided to cast aside. Sad.

"How many?" You say you have 3 machines, so at a guess I'd say you're probably half of them by yourself!
I don't mean that in a harsh way, but my dad's running a laptop that's at least 12 years old, and even that's 64-bit capable.

The most recent machine I've owned that was 32-bit only was a Pentium III, roughly 20 years ago. Even Intel, who were very late to the party, haven't made CPUs without 64-bit support since some early P4 revisions (dropped ~15 years ago) and haven't introduced such CPUs since 2005.

While it's commendable that you've kept the hardware alive that long, you're a tiny tiny minority. You may not be literally alone, but I can assure you you're in a much smaller group than you seem to think.
Yes, it sucks for you personally that Ubuntu has dropped 32-bit support, but considering those timeframes it would be far more unreasonable not to have done so.

Back when the decision was made by Canonical, the discussions around this subject revealed that in less prosperous countries there was a much higher proportion of 32bit computers in use (for a number of reasons). However, as time goes by there can only be less and less of them.

I'm one of the people you're talking about. Marco works, it's simple and it's lightweight. I have no problems with Marco and the apps I use. I'm a software developer, so I use mainly development tools (Visual Studio Code, CodeLite), plus the basics like the Firefox browser and LIbre Office. No games. I haven't encountered any issues with Marco (Adaptive compositor), so what would Compton do for me? The reason I don't choose it myself is that it uses "Advanced GPU accelerated desktop effects", and I don't want my CPU or GPU being used for anything other than software development tasks. But I'm willing to learn, and to switch if there are any benefits to me.

By the way, I don't know what you mean by Marco does not handle transparencies. I have Mate Terminal configured with a partially transparent background, and that works fine under Marco (and under Compiz.)

I upgraded today, it was ugly. lightdm would not start, I was able to install gdm3 and sddm, they both
worked but I prefer lightdm. Finally found it was something in /var/cache/lightdm that it was choking
on. Unfortunately I spent about four hours arriving at this. Then a similar problem with apport because of old crap in /var/crash. If new programs are incompatible then the install script ought to
remove the cache or at least tell you that you need to.

Thanks for the email, but hint: none of the links are working.

Updated without issue yesterday...so far
Weird changes in Thunderbird though. e.g. PDF attachments opening withing TB; no option to open them with Atril without saving them on the machine. Or copying an activity to another date; no possibility to edit the second instance. Will dig about this if there is a way to revert some changes.

@Ansley and @Elbarbudo, per the release notes:

"We will be refreshing our Ubuntu MATE images for Raspberry Pi in the coming weeks."

On my 32-bit systems, I personally prefer Debian. While Canonical has decided that it's not economical anymore to create 32-bit versions of Ubuntu (so don't blame Ubuntu MATE per se), Debian still continues to support 32-bit systems. Oh yeah, and they also support other ancient architectures, even the DEC Alpha! (I haven't tested Debian on an Alpha, but the software is apparently built for Alphas.)

Now, even then, Debian on 32-bit systems isn't always a pleasure ride. There are some bugs which crop up on the 32-bit version but not on the 64-bit version. Case in point: LibreOffice has a tendency to use 100% of one CPU core when you're not using LibreOffice for some amount of time, but the issue appears on no other architecture. There's a bug report for this that's been open since 2018, and I'm personally looking into this since I use LibreOffice on 32-bit hardware.

In other words, there will be bugs, sure. But at least Debian is receptive to those bug reports, unlike other distributors.

Just my two cents of advice, as an avid stock Debian user for three years.

After that, under terminal type this command.

after that use this command to install kodi from the terminal

And wait till it finishes install kodi.