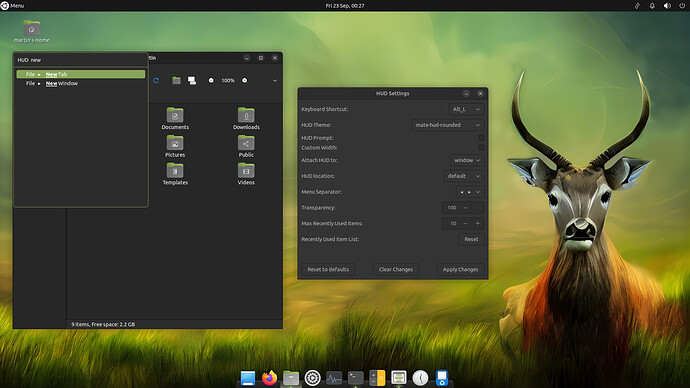 Ubuntu MATE 22.10 is available now! This release is optimized

Ubuntu MATE 22.10 is a modest update by recent standards and focused on “quality of life improvements”. And there is good reason why this release of Ubuntu M...

nobody wants to use an unstable version of ubuntu. stick to the lts versions folks, do you really wanna have to upgrade for 9 months, no, ya don't. heck, debian would be better because its lighter with the mate desktop and comes with no unwanted crapware like deja doup, rhythmbox, celuloid and the like

Some people use the unstable versions for testing for the next LTS release.

Dear Frank,
I have Ubuntu MATE on my laptop installed for me by a friend. I see this update news. I am not knowledgeable about any of this coding or programming though am totally in awe of those that are! I am a photographer and have loaded up my archive onto this laptop. Will I have to clear it to instal this new update or will it not affect any of the files and folders??
I'm quite confused by how this all works but think it is brilliant, has been working very fast and I tell people about this quite regularly.
Thank you
Best regards
Emilie Selbourne [email protected]

If 22.10 is labeled "unstable" then the rest of the world shall be seen as under constant earthquake... I've been upgrading to any new version since my initial 17.04 entry to UM. No issue, nothing unstable. Exept for some small 'glitches' from time to time mainly user's (i.e. me) fault.
I'm glad that in this 22.10 upgrade Evolution didn't follow.
As to 'crapware'.... well... each their opinion. That is why there are more then one offering out there.

Given your current Ubuntu MATE setup is still supported (Meaning 20.04.5 or latest) then upgrading causes 0 data lost and all of your Documents, Pictures, Desktop etc files will be located identically.

Some/most of your configurations also remain in place so upgrading to this version might be worth a shot!

I too am QUITE EXCITED about this announcement yet will wait for the next LTS version has it has occurred to me in the past that some of my hardware and software stopped working which made me really mad and confused.

Security of your data e.g. photos
There is a well established principle, if an electronic file is important to you, you should have 3 copies of it.

Do you need to upgrade to the new version?
Only if you want to.

I hope this helps you to understand what version upgrades are all about.

That's easy: you should leave it alone.
At most, you could ask the friend what he thinks, but if he has any idea what he's doing he'll also tell you to leave it alone.

Some of us enjoy playing with these "intermediate" versions, and testing them, and so on - but we do it with the understanding that things might go wrong, and with appropriate safeguards in place.
You are not a member of that cohort, and have not expressed a desire to be - and both of those things are absolutely fine. But you don't know what you're doing, and the repercussions are beyond your current ability to even understand, let alone cope with.

It's not that it will eat all your photos (at least, hopefully not), but the fact that you even have to ask means you shouldn't be touching this. Ignore it for the next two years. If you find yourself with free time in the interim, you can amuse yourself learning about all the different ways to make backups of your photos instead, since that's much more important both to and for you.

I'm looking at the snapshot for Ubuntu MATE 22.10 and now I'm getting nervous about what's happening.

I started using MATE in 2019, and the install package came default with a top and bottom bar. I was able to use the top bar to put launch icons on and the bottom bar did nothing that I needed other than having icons for open apps on it along with buttons for multiple desktops so you can switch between desktops.

Looking at the snapshot of the desktop I see EXACTLY what I don't like, which is a top bar devoid of anything useful other than on the right side where it still shows buttons for different apps to control those apps and I assume a menu button on the left side.

Did you all get rid of the default of how the two bars work? I've used Ubuntu MATE for the behavior of those two bars and being able to put icons on the TOP bar as default behavior and buttons on the bottom to select between open apps. This allowed those bars to be uncluttered if you have many apps open like I often do.

So, did you change the behavior of the bars, and if you did, is it easy to make the top and bottom bars work the way they used to? Every version of MATE I've seen where the default behavavior wasn't like what Ubuntu MATE was with the two bars, it took WAY too many steps to try to get that behavior and I gave up on them. Please tell me that I don't have to start AGAIN looking at all the different variants of Linux desktops to see if I actually like anything, which in the past was a big NO.

System -> Preferences -> Look and Feel -> MATE Tweak. Click Panel on the left then change the panel to Traditional.

You will get the 2 panels top and bottom.

Thanks for the info. Now I know I don't have to spend a few days looking at distros again as long as the behavior is the same as what it was.

I've used interim Ubuntu MATE releases and have never had a problem, other than the typical of getting certain software to work which can happen with any variant of Linux desktop, and not software that comes with Ubuntu MATE or software that's listed in the store, but software I want to use and it's possible to install whether it's validated or not.

I am trying to ugrade to Ubuntu Mate 22.10 but always get a warning about making sure that the screen lock is disabled. I have tried to do this in different ways but nothing seems to work. Could anyone help me in this respect?

You should post this in a different area since this is an announcement post for 22.10 and not a help forum.

You probably won't get a response here. There should be a section for help and posting problems.

Ubuntu MATE has Interim releases that aren't supported very long and they have long term support releases. If your friend did the install you should talk to your friend. Really. Whatever he did, he did it based on what he knows about you. My guess is if he installed an LTS release (long term support) he expected that to be installed on your computer until it's no longer supported, at which point you two could make a decision about what to do next. Most people should install long term support releases though, and the latest LTS is 22.04 which is perfectly fine.