I've been having trouble with certain actions in my web browser crashing my desktop session. The screen will temporarily go black with a blinking prompt, then I'll need to login again and relaunch any apps that were running.

Any ideas how to troubleshoot? I just did a clean re-install, and the issue remains on this laptop. I haven't noticed it on other 22.04 installations on other hardware.

I can reproduce the issue with both Firefox and Brave browsers.

Thanks in advance for suggestions.

I think you've narrowed it down to a hardware issue. I'm not sure if you've come to that conclusion.

I've experienced no such problems with my many installations of 22.04.

Thanks @mdd12
Perhaps you are correct. The two things that make me question that conclusion are:

I tried disabling animations and changing the window manager to Marco (No compositor) in case my crashes had something to do with graphics rendering, but that didn't help. 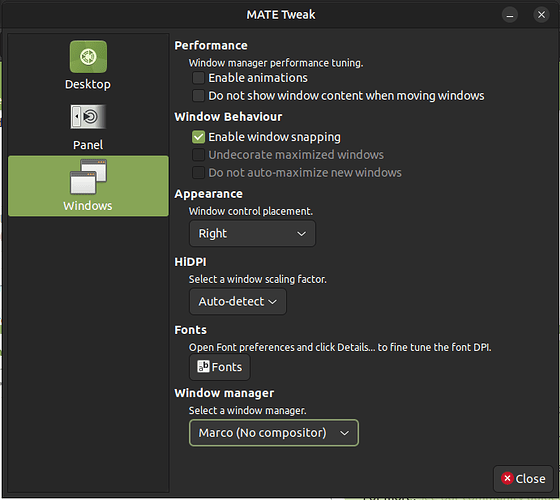 I can reproduce by simply attempting to snap a window to the edge of the screen.

I wonder if there are any diagnostics that developers might be interested in having before I wipe the OS again?

I think that's the right approach. It should help to determine if it's a hardware failure or an incompatibility regression. I have that problem with bluetooth. Works just fine under 20.04 but fails under 22.04. All of my laptops exhibit this behavior so obviously it's the OS.

Best of Luck. If you find anything interesting, let us know.

I have that problem with bluetooth

Just curious as to meaning of problem. Does your bluetooth crash the MATE desktop session or there is different issue on your using bluetooth.
Thanks

No, it does not crash the Desktop. It simply will not scan correctly for devices, specifically a logitech bluetooth keyboard. I can use the same hardware and boot between 20.04 and 22.04. It works under 20.04 but not under 22.04. This works under MATE or Unbuntu proper. I try Fedora with the latest kernel and it works just fine. Of course Fedora uses a different stack so whatever we are using (I think Blueman) has troubles with something in the new release.

Does bluetooth work for you (headphones, keyboards, etc.)?

Thank you for clarifying.
Only use to connect to two phones and a tablet.
Only issue I had was failure when trying to send file from Desktop to a phone. Finally found that in phone bluetooth settings somehow the profile for my Laptop had switched to Media audio ON.
Was working before in 20.04 and did not switch it but somehow it changed.
Switched to off and all is well for me.

I'm not sure if it's related, but I remember seeing something similar a few months back -- regarding the Pale Moon browser:

I know the title talks about the DWM window manager, but in the end the problem was resolved by downgrading the Mesa graphics libraries. Periodically a new graphics driver comes along for Intel integrated graphics chipsets (ahh, let me recall all of them over the years -- i740, i810, i915, i965, iris, crocus -- I might be missing a few!). When a new driver comes out, Ubuntu (and everybody else into distributing these drivers) loves to jump on the new drivers immediately; stupidly, even the Ubuntu LTS releases are not always conservative about this.

And the driver usually is buggy when it's first released. So random crashes -- sometimes crashes that bring down the whole GUI -- develop.

I honestly don't know how to safely downgrade Mesa, and furthermore you might be using some other graphics driver -- God forbid Nvidia, good luck with those. I'm just hoping somebody else here knows what to do with the information I've provided.

Thanks for the suggestion @gordon

I ended up just re-installing MATE 20.04.4 this afternoon.

So far no issues encountered on the older version. So, I'll probably just stick with this install until it is no longer supported.

I'm not sure how to downgrade the Mesa graphics libraries, but if someone would benefit from it and could walk me through it, I'd be willing to give it a shot in the future.

I'm not sure if I should just mark this issue as resolved with my downgrade? Maybe a forum moderator can tell me what the best practice is around that

I didn't actually fix my original issue, but just worked around it.

I say, leave this topic open, just in case somebody else has the same problem that you do and they want to downgrade Mesa. And, if/when this gets resolved in 22.04, maybe somebody can announce here that the problem doesn't exist anymore.

I have exactly the same problem as CitizenUnderdog. With 20.04, my pc works good, but with 22.04, it is exactly as described by CitizenUnderdog. I also reinstalled 20.04 and it works. My pc is an Asus TravelMate.

Thanks for the link @tkn

I am not knowledgeable enough to apply the information in any sort of fix, but there seems to be some correlation with my install. I am using an older laptop with integrated Intel graphics. So I suspect some sort of issue with x server as well.

I'm having the same issue, running on a Lenovo x201. Identical to CitizenUnderdog.

I got a clean bill of health from memtest86+ and haven't been able to see anything suspicious in journalctl.

How do I downgrade my mesa driver?

Well, here in the Ubuntu MATE Community, in another similar discussion - Ubuntu Mate 22.04 auto ending Sessions when I do something specific - the user @esan_br (Elias Andrade), that has a "Dell Latitude E6410" which also has an "Intel HD Graphics" as its Graphics card, solved the issue that was happening to him, in "Ubuntu MATE 22.04 LTS" ("Jammy Jellyfish") by:

3 - And then rebooting the computer.

Ubuntu Mate 22.04 auto ending Sessions when I do something specific Support & Help Requests

@Ygor6889, Igor, is your video card also from intel? I just solved the problem on the Latitude E6410. I created the /etc/X11/xorg.conf.d/20-intel.conf file with the following content: $ cat /etc/X11/xorg.conf.d/20-intel.conf Section "Device" Identifier "Intel Graphics" Driver "intel" Option "TearFree" "true" EndSection Then I restarted the system and Ubuntu Mate stopped crashing! I saw someone on this post reporting a similar problem: And then I followed what was in the 6.1 section of …

In that same discussion, the user @Ygor6889 (Ygor Oliveira Silva), that also has a computer with an "Intel HD Graphics" video card, says that @esanbr's solution worked for him as well:

Ubuntu Mate 22.04 auto ending Sessions when I do something specific Support & Help Requests

Thank you to everyone who tried to help me, @esan_br gave the solution, not only it did work but it completed fixed the issue Problem SOLVED! "Obrigado!"

So, @ubuntu_101422, I suggest that you try @esan_br's solution, see if it works for you and then reply again in this same topic where we are now, to tell if that solution also worked for you (or not).

This seems to have resolve the issue - thanks!

Thanks Ric, this also works for me.
I had an old Desktop PC with intel G41 onboard video that crashes constantly with Ubuntu Mate 22.04 fresh install (trying to instal an app, opening some files, opening some pages, etc.) and with your post i resolve the issue.

I have a machine that has the Intel GM45 chipset and uses the i915 driver that was crashing from both Firefox and Chrome browsers, and the 20-intel.conf file listed above seems to have solved it, however this change created a new problem... the menus from the Indicator Applet (v 1.26.0) pull down in a relative position far from the indicator itself, in my case the Indicator Applet is located top-right, and the menus appear at about the midpoint of the horizontal Panels bar. Better than crashing, but annoying and difficult to use...

Welcome @billstei to the community!

This tweak has resolved several issues I was having.
Now I might upgrade a couple more devices to Kinetic.