How to disable Synapse animations?

I’ve always been a fan of gnome-do. When I first discovered it I compared it with another similar application that according to some people was “So much better than gnome-do!”. However I found a serious problem with this app that made it unusable. I don’t remember the name of the app nor what the problem was, but after that I just started using gnome-do and it’s been working well ever since.

Today it came to my knowledge that Synapse comes installed with Ubuntu Mate 16 (or at least I don’t remember installing it myself). I hope synapse wasn’t the other app I tried back then, or if it was I hope the problem is fixed now. I’ve been using it for some minutes and everything seems OK so I guess whatever bug I experienced before is no longer present, and I would be happy to replace gnome-do with it as long as it continues to work well. So far so good.

But there’s something about Synapse I don’t like, or rather I don’t need: its animations.
There’s animations when you invoke it, animations while you type, in the results list and who knows where else. I’ve got nothing against them but I’d rather do without them. I checked the settings and I didn’t see any option for disabling them. Changing themes doesn’t help either. I also had a look at the plugins tab to see if maybe a plugin is what gives synapse its animations but this doesn’t seem to be the case.

So the question is, how do I disable synapse’s animations?

And just to make sure I’m not missing something good, are there any other apps bundled with Ubuntu Mate that allow you to do usual tasks more easily and efficiently like gnome-do/synapse?

I just tried a search with Synapse and cannot replicate your problem, it works fine here!. I found how to edit the settings but there isn't a lot you can do with it! (once you start Synapse the symbol will show in the top panel, right click > Preferences). 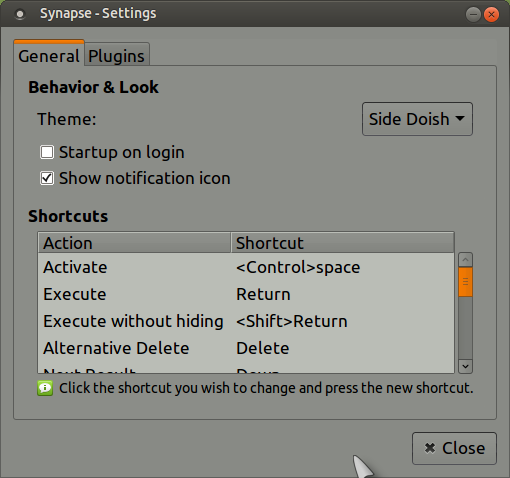 As you seem to be having multiple problems (I am assuming this because of your many different threads on the forum!), I must ask you how you created your bootable media and did you follow this advice?:

Hi all, as the title suggests, some and/or many problems with your installation can be avoided by burning the ISO file at the “SLOWEST POSSIBLE SPEED”, most if not all burner apps will automatically choose the fastest speed available for your disk burner drive so it is important before you commit to burn a CD/DVD that you select the menu tab which controls the burn speed and select the lowest number on offer. Your burner drive may well support a burn speed of 20 X for DVD and 60 X for CD’s a…

What (if any) graphics card driver do you have installed?:

ATTENTION ATI/AMD GRAPHICS CARD OWNERS, IF YOU INTEND TO USE UBUNTU (MATE) 16.04, PLEASE READ THE FOLLOWING FIRST!. EDIT: POSSIBLE SOLUTION FOR SOME WHO HAVE AN AMD CARD ON THE LIST HERE: http://support.amd.com/en-us/kb-articles/Pages/AMD-Radeon-GPU-PRO-Linux-Beta-Driver–Release-Notes.aspx See also: https://support.amd.com/en-us/download/linux First and foremost, Intel drivers are auto installed and there is no reason to start to try installing any drivers for Intel graphics cards as the …

These are my own setting preferences, use at your own risk!. AN IMPORTANT NOTE FOR LINUX BEGINNERS. WHEN YOU ARE IN RECOVERY MODE, THE KEYBOARD DEFAULTS TO US ENGLISH, IF YOU HAVE ANY OTHER LANGUAGE KEYBOARD OTHER THAN US ENGLISH, WHEN YOU TYPE “Y” (FOR “YES”), IT MIGHT SHOW UP AS A DIFFERENT LETTER, ON MY KEYBOARD I MUST PRESS THE “Z” KEY WHICH EQUATES TO “Y” AS I HAVE A GERMAN KEYBOARD, JUST PRESS “BACKSPACE” AND HIT A DIFFERENT KEY UNTIL YOU SEE THE “Y” SHOW UP!.

I just tried a search with Synapse and cannot replicate your problem, it works fine here!. I also cannot find how to edit any settings as there isn’t a button to do that!.

Do you mean your synapse doesn’t display animations? It also works fine here with animations but it would work faster if I could turn them off.

[quote]
As you seem to be having multiple problems (I am assuming this because of your many different threads on the forum!), I must ask you how you created your bootable media and did you follow this advice?:[/quote]
Well, I’ve asked a couple of questions now, but only two of them are about actual problems, the others are about customization and tweaking. The system actually works quite well (since I stopped using compiz) but it would work better for me if I could change certain things.
I installed Ubuntu from a USB stick so I don’t think the CD article applies to me. It’s good advice nonetheless. I’m quite sure my questions aren’t related to graphics drivers

I just did an edit on my previous post about the settings!.

Hi
I don’t have any animations either, unless we have a different definition of what an animation is.
Maybe what you’re seeing is a side effect of something else?
What are you using as a Window manager? (Check in MATE Tweak under “Windows”) - I’m using Marco+Compton

@ouroumov when you launche synapse, type something and press the Down arrow key to see more results, it desn’t just go down, it slides. That’s an animation
I’m using marco without compositing (I assume “compton” is what allows the compositing, right?)

On my machines when I hit the down key on a search it just appears instantly - no slides.

Can anyone else reproduce @Staynluss’s observed behavior?

Same here. I am not sure which animations. It works as expected, either with or without compositing.

Here’s a short screen video to show you:
https://goo.gl/AFMqZi

If you can’t see the animation try reducing playback speed or playing frame by frame on your favourite video player (E continously on vlc). You’ll notice there’s some sort of fading of the selected entry (the text goes progressively from black to white) and when I move down past the third entry, the list scrolls down in an animated way (this is what I called “slide”, it’s more like smooth scrolling).

I want to get rid of both animations, and all the others synapse might have too.

I took a look but really cannot see much wrong with it, have you tried changing your desktop theme as it may well be related to the theme you are using?.

@wolfman there’s nothing wrong with it, I just don’t want the animations.
I’ve only tried with 2 or 3 themes and it’s the same. I will try with all the remaining themes and edit the post 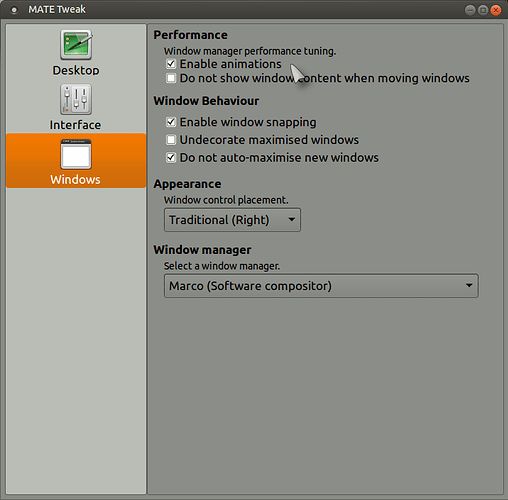 I see no animations there, sorry. It is just changing to this ugly white background in your screen cast. What theme are you using? I use Mate Radiant.

I see no animations there, sorry. It is just changing to this ugly white background in your screen cast. What theme are you using? I use Mate Radiant.

You see no animations in my video? did you try watching it in slow motion? You said the keyword yourself: changing, which implies an animation. If there was no animation, it wouldn’t progressively “change” to the ugly white background as you say (LOL), it would just instantly turn white.

I think we have a misunderstanding about what animations actually are. Sorry but Synapse has no options for “fancy” animations. You seem to have a problem with the background color. Mine turns into green, not white.

“LOLing” at me is not really nice btw as I was trying to help you. Take care and have fun.

I think you hit on it David, he is referring to highlighting.

Highlighting, that is term I was missing. Thanks.

Changing the theme would also change the highlight color.

I think we have a misunderstanding about what animations actually are. Sorry but Synapse has no options for “fancy” animations. You seem to have a problem with the background color. Mine turns into green, not white.

“LOLing” at me is not really nice btw as I was trying to help you. Take care and have fun.

To me an animation is a graphic change that requires a number of steps and a period of time to go from appearance A to appearance B.
Example: a black square that turns dark grey, then medium grey, then light grey and finally white after 0.5 seconds. If there was no animation it would go instantly from black to white without going through the shades of grey.

If you look carefully at my synapse, you’ll see the highlighted entries’ text doesn’t instantly turn from black to white, it turns grey before finally becoming white, fairly quickly but it happens. And that’s just one of the animations shown in the video. They’re not fancy but they are still animations. I was actually going to try to edit the video with kdenlive to make it look as if there was no animations but hell, it requires SO many dependencies. The only other good option I know is blender but I’ve no idea of how to use it for video.