How to install graphics card drivers in Ubuntu

AMD/ATI owners read this before upgrading to 16.04 Thoughts & Feedback

EDIT: POSSIBLE SOLUTION FOR SOME WHO HAVE A CARD ON THE LIST HERE: http://support.amd.com/en-us/kb-articles/Pages/AMD-Radeon-GPU-PRO-Linux-Beta-Driver–Release-Notes.aspx Take a look here if you have an AMD/ATI graphics card/chip if you intend to upgrade to Ubuntu 16.04: IF YOU ARE LUCKY YOU WILL FIND YOUR AMD CARD ON THE FOLLOWING LIST BUT PLEASE BE CAREFUL AND DON’T CHANCE YOUR ARM!: https://support.amd.com/en-us/download/linux

EDIT: POSSIBLE SOLUTION FOR SOME WHO HAVE AN AMD CARD ON THE LIST HERE:

First and foremost, Intel drivers are auto installed and there is no reason to start to try installing any drivers for Intel graphics cards as the best drivers are already installed!.

The following is for Nvidia and AMD (ATI) graphics card owners. 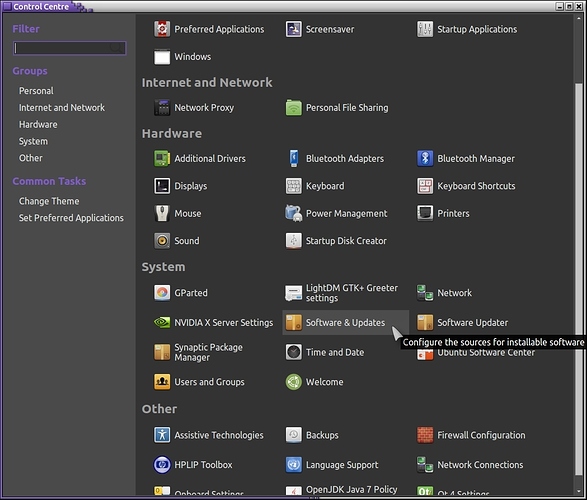 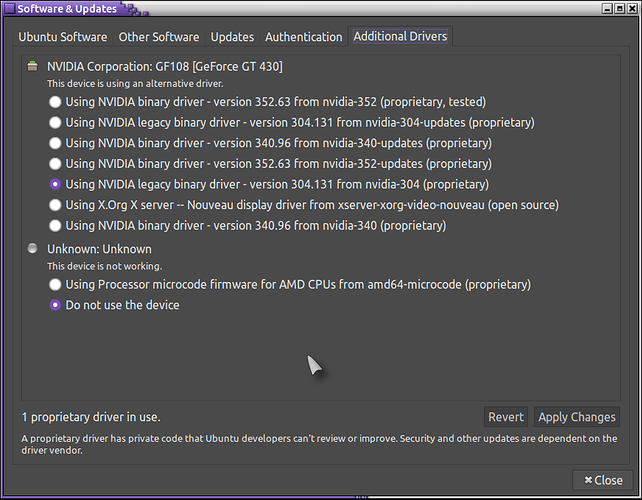 Window showing list of available ATI (AMD) drivers (Not mine btw but the only example I have!): 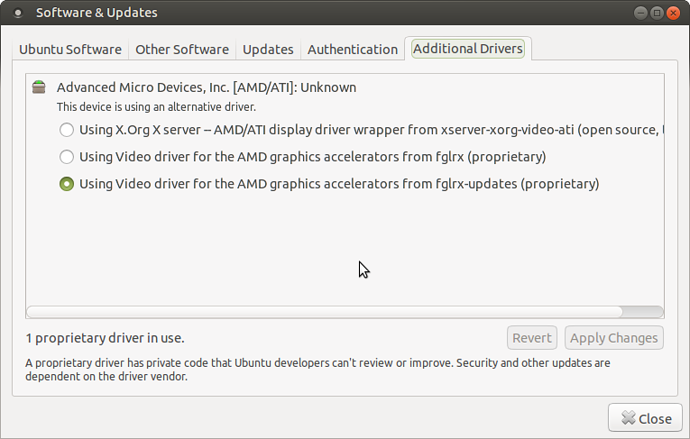 If you do not see any available drivers for your graphics card, then your graphics card is most likely quite old and you should stick with what you have installed!, if you do see suitable drivers for your GPU, select the driver you want and click on "Apply Changes" and wait for the installer to do its thing. If nothing happens because the tool isn't working, you can manually install the drivers via the terminal (See below for instructions!).

Restart your PC after installing drivers!.

Here are the official links for Nvidia and AMD/ATI drivers:

Make sure before you start to install the drivers manually that they are indeed the correct ones for your GPU, DON'T TRY INSTALLING AMD/ATI DRIVERS ON AN NVIDIA PC OR VICE VERSA!. THE SAME APPLIES TO INTEL DRIVERS TOO!.

You can easily check your GPU by opening a terminal (Ctrl + Alt + t) and typing: 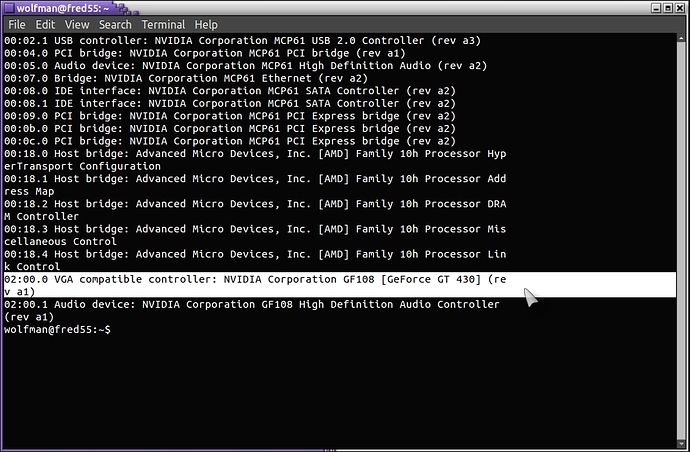 which will tell you exactly what make and model of GPU you have on your PC.

Manually adding your drivers via the terminal:

Assuming that available drivers are showing in the Additional Drivers Tool, all you need to make a note of is which has the highest number and its make.

As an example, I will show you the command for installing the Nvidia drivers for my Nvidia GPU PC, open a terminal and type (copy and paste if you like) the following command (AS AN EXAMPLE ONLY!):

If you need the AMD/ATI drivers, (AS AN EXAMPLE ONLY!):

The above is the Video driver for the AMD Radeon and FireGL graphics accelerators. This package provides 2D display drivers and hardware accelerated OpenGL for X11. (NO 3D ACCELERATION!)

The Radeon driver does have 3D support providing your GPU shows as supported in the list on the following page, double check it!:

Okay, I installed the wrong driver and now I can't boot/my graphics are shot!:

Don't panic, you can remove the drivers as easily as you installed them!. 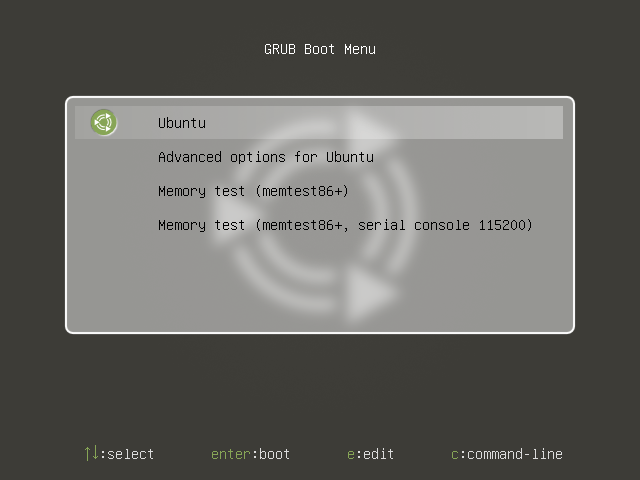 Once in Advance Settings (select advanced options for Ubuntu and then the 2nd option again), activate "Network" (using a network cable connection not WiFi) and then go to "root", wait until the messages vanish (you will most likely get a message about networking, just click on "Enter" and say yes if asked!).

Now type the following (using the Nvidia drivers as an example):

or for the AMD/ATI package:

Once done, you may or may not get a message about restarting, IT IS VERY IMPORTANT TO RESTART AND NOT CLICK ON RESUME, press Ctrl + Alt + Del and let it restart normally and your problem should be gone!.

Another method to install or remove problem driver packages.

To install or remove packages, press "Ctrl + Alt + F2 " which will take you to a semi graphical desktop, use your normal login name (username) and type your password (doesn't show in the window or give any indication that it is being noted!).

Enter your username followed by your password and then type your command(s) (the following are only meant as an example!).

then restart your system:

I cannot really comment much further on AMD/ATI drivers as I don't have a card on either of my PC'S!. Maybe someone with one can add more valuable info for this thread!.

So... to, finally, verify this for me (and those with similar graphics hardware), I do not need to do anything with my graphics card driver(s)? 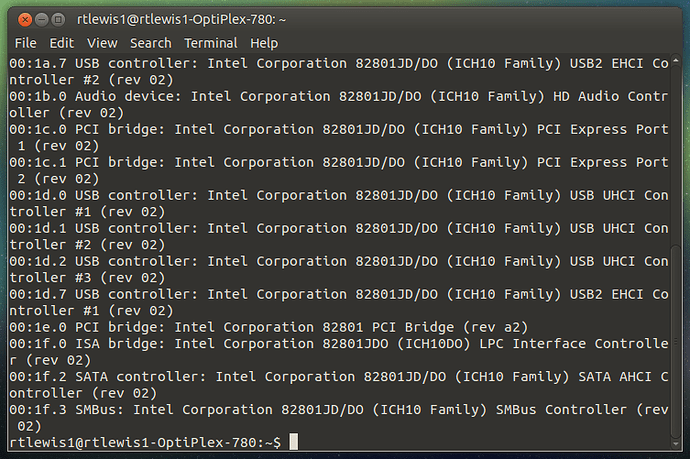 Thanks, I have had this question, in the back of my mind for months, @wolfman!

No @mated, if you really; really want the latest drivers, follow this link and add the PPA but there is really no need as the drivers that are installed by default are tried and tested, the PPA drivers may or may not improve your VGA performance!:

you will get a readout like the following which is also Intel on my mini notebook and the reason they don't show when you type lspci is because the info really isn't necessary because the best drivers are already installed!: 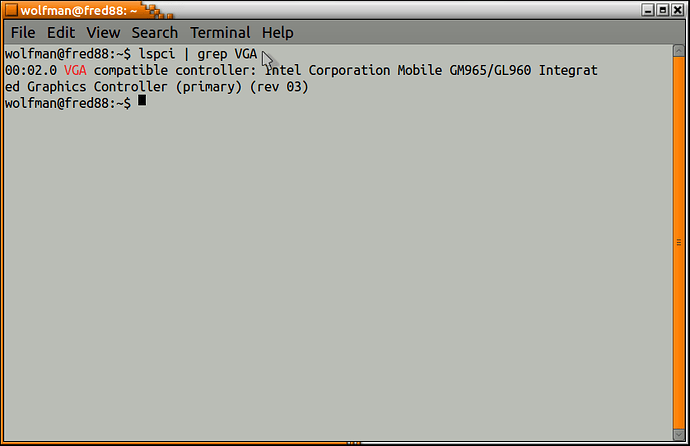 I shall take your advice, @wolfman, and keep things as they are... 'if it ain't broke, don't fix it'

I have actually found that on some integrated graphics for AMD/ATI, installing proprietary drivers are actually worse then just using the open source ones.

For anyone interested in the reason why Intel does not need any drivers – they’re part of the kernel, Intel work with the open source community to create them, whilst AMD/NVIDIA’s open source drivers are generally driven by community efforts.

Just for anyone who cares, I installed the drivers for my Nvidia 980ti by downloading the driver from Nvidia and then installing, using terminal in root, with sh. I’m running Ubuntu MATE 16.04.

The --no-x-check is necessary since you cannot install while X server is running (the gui). Not everyone likes to risk running in root, though. Still it is working for me so far, if any problems come up I’ll be sure to post.
If you are unsure about root, don’t use it.
Any questions welcome.

Sorry, my mistake. That command is not in 12o4. I was trying to find out what your running. Go this way:

before login at boot, boot freezes 40 seconds, after that error message:

after that mate boot into login.

Some Idea to fix it without uninstall the nvidia driver 340?

leave the 340 package installed and install the following package (or at least try it), the terminal command (Ctrl + Alt + t) is as follows:

This is on the assumption it will work for you???.

I’ll try it in the next days… maybe these will work, but I have not tried it yet.