How to easily format and partition a USB flash drive?

The formatting and partitioning process in Ubuntu MATE is not as smooth as I had hoped and I frequently run into problems.

I am not sure what it means, so I formatted again (this time I used the quick format option in Disks). Before I get any further error messages, I am wondering whether I have chosen the wrong partitioning option. Which option shall I choose and why (for later use as a bootable USB drive)? 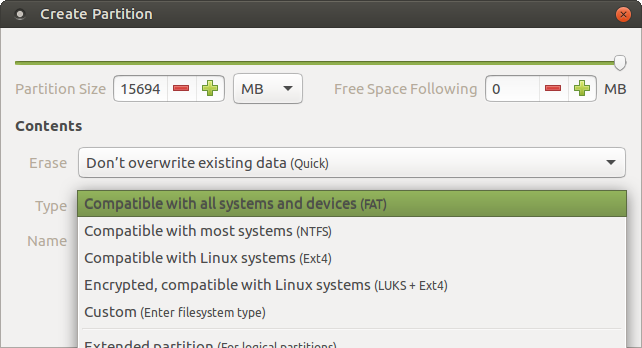 PS:
Does anyone know how I can numerate my questions/problems in this thread? In the editing view I see it as 1. 2. 3. In the viewing pane and the published thread there is no enumeration.

if you want just a normal bootable USB, just pre-format the stick to FAT32 first with Gparted!.

If you want to use persistence mode, see this:

How to use Unetbootin Tutorials & Guides

If unetbootin doesn't work for you, try "mintstick". You should (can) also install udisks2 in Ubuntu 15.10 and higher!: http://pkgs.org/search/mintstick http://pkgs.org/download/udisks2 Firstly, download your preferred version of Ubuntu Mate OS, 32 or 64 Bit (if you are unsure, download the 32 Bit version) (Ubuntu/Debian/Voyager/PinguyOS etc) in the form of an ISO file, remember where you store the file!. (I am not talking about using the Unetbootin download function, I am talking about yo…

This is actually the partitioning table, there’s two of them:

The latter being newer (less limitations) and supports > 2 TB. For a flash drive, MBR is sufficient.

I have formatted a USB flash drive (with Disks) and got the following error message when trying to create a partition (again with Disks):

Is there anything I need to consider when I intend to use a USB flash drive for storing documents or in order to make it bootable by burning an ISO file onto it?

For storing files, it’s best to use FAT.
For creating a bootable USB from an ISO or IMG, the “Restore Disk Image…” button is used instead.

If you mean creating a “persistence” flash drive (stores data across live sessions), the tool used to create it is responsible for that.

Does anyone know how I can numerate my questions/problems in this thread?

It’s markdown syntax. Apply 4 spaces to the start so that the content is aligned with the number, like this:

Thank you both for your help @lah7 and @wolfman
I am still not sure why the Format Disk option suggests Erase and Partitioning when in fact the only thing it does it formatting. When I select MBR and then start the process I end up having a formatted but not a partitioned USB drive. This is extremely confusing.

Is the above what you are trying to achieve?.

I didn’t know there is something called persistence mode. @wolfman
My problems with formatting and partitioning are much more basic.

I have never used the “Restore Disk Image” button to create a bootable USB, so I have no idea what it does differently than using the Startup Disk Creator in UM. @lah7

It is a pity that there is no program to easily format and partition a USB drive on Ubuntu MATE. The question about a possible fork of USB Image Writer and USB Formatter was raised some time ago but unfortunately not pursued any further. Disks is not intuitive at all. There are too many options without any explanation of what to use and why. I am hoping for a program which asks what you would like to do and does it with one click. The lack of an intuitive formatting and partitioning tool is one of the biggest drawbacks in UM for me.

I am still not sure why the Format Disk option suggests Erase and Partitioning when in fact the only thing it does it formatting. When I select MBR and then start the process I end up having a formatted but not a partitioned USB drive. This is extremely confusing.

I know there is a learning curve when dealing with a new operating system but it is not too much to ask to get things done in a simple and intuitive way. Does anyone know how other distros solve this problem?

you can use the partition guide to give you an idea about partitioning, although not intuitive as you say; it does offer an insight into how to partition!:

Linux beginners should also look here: You can only partition on an unmounted drive using an installation disk of your Linux flavour with a partitioning tool included, use the Gparted tool in live mode, or you can download a copy of Gparted from the link below and create your own Gparted disk: http://gparted.org/download.php WARNING BEFORE YOU START TO PARTITION YOUR DRIVE: MAKE SURE YOU DEFRAGMENT YOUR WINDOWS DRIVE BEFORE YOU START RESIZING THE WINDOWS PARTITION AS IT MAY WELL LEAD …