MATE 16.04 is running great on my Lenovo G780 and I wish to test my wings further, specifically a Virtual Machine for W7. I have some programs that require it…

I would like to try this first before trying dual boot.

What it the best VM for MATE 16.04?
I let the installer partition my disk. Do I need to make any “improvements” before I attempt this?

Thanks for your opinions, Fred

Check out VirtualBox. A lot of people use it and makes it easy to get support.

There is a bit of a learning curve, but once you get pass that it is usually smooth sailing.

Check out VirtualBox. A lot of people use it and makes it easy to get support.

That is welcome news.

I use Virtualbox for all my MS Windows needs. Most specifically, for using my Cannon LBP 2900i laser printer. Which obstinately refuses to work on Linux. No problem with my Win7 VM though. I simply drop my file to be printed in a special shared folder than can be seen by both the host and VM client, then fire up my VM client and print from there (Virtual box VMs can still see and interact with real world host peripherals like printers).

If you hit any snags along the way, shout up and I along with others will be happy to help.

I use Virtualbox for all my MS Windows needs. Most specifically, for using my Cannon LBP 2900i laser printer.

That @stevecook172001 is one of my greatest needs.
Not a Cannon printer, but an HP and a Brother both running wireless.
I can see us “talking” in the near future.

My history of transferring over to Linux involved the following:

In 2007, I installed Ubuntu 10.04 as a second OS running in parallel with WinXP. Back in the days of Ubuntu 10.04, it could be a real pain to get things like wifi, scanners and printers working. But, it was more or less good enough and the steep learning curve that came with 10.04 provided me with good grounding in Linux.

By 2009, I had done away with the winXP partition and, instead, had it as a VM in Virtualbox. I still used it for a lot of my music and 3D design stuff, which I do as hobbies, as well as using it for MS Office, which I need at work and where I often brought home files to work on.

When, in 2012, Ubuntu 12.04 came out with the dreaded Unity Desktop as standard, I fell back on the “Gnome Flashback Desktop”, which was in fact the old Gnome 2 Desktop that came with Ubuntu 10.04. But, it did not feel like it was being maintained well and so, for a couple of years I went with Linux Mint and the XFCE desktop.

Fast forward to late 2014 and I discovered Ubuntu Mate. Which is, in fact, the old Gnome 2 desktop brought back to life and up to date. Since then I have stuck with the Mate desktop as it is just so intuitive to use and fits my work flow perfectly. I have experimented with Mate on other distros, notably Debian, Manajro and Mint. But, they all lack the underlying solid infrastructure of Cannonical’s Ubuntu (with the possible exception of Mint, I do like their LMDE-Mate edition) and so here I am.

In terms of what I now use my Windows VM for these days, it is actually very little. Libreoffice has come on in leaps and bounds over the last few years such that all word-processing documents and most spreadsheet documents can be easily converted with a few clicks of a mouse. There is still an odd occasion, however, when I need to use MS office. This tends to be for MS Access database work and for spreadsheets that contain complex macros. In all other respects, bar one, I have converted my hobby software over to open source Linux versions. The one exception being a piece of software that converts photographs of an object into a 3D mesh using a process called "photogrammetry. I am experimenting with getting this working with an open source alternative. But that is still a work in progress. In the meantime, I do it in my VM.

The only thing which I consistently still need my Windows VM for, though, is using my Laser printer. When it finally conks out, I will make sure to buy a Linux compatible one. The problem is, the damned thing just refuses to die!

I mention all of the above by way of providing you with some idea of the kind of trajectory you might expect yourself in terms of your transition over to Linux. I suspect my own trajectory is reasonably typical. The main thing I have noted, as the years have passed, is just how much more flexible Linux is compared to MS. sure enough sometimes it can be a pain figuring out some new problem that may arise without the hand holding that comes with MS. On the other hand, I no longer have to endure Microsoft’s suffocating embrace and that alone make using Linux worth it.

My history of transferring over to Linux involved the following:

That is quite a process you went through. I am fortunate that I have leap frogged into the future and shouldn’t have all the learning you had to endure.

So far the only thing happening with this installation is that it has died twice in Firefox while I was composing an email in gmail. Today absolutely everything was frozen except the input message which I could scroll up and down, with the mouse scroll wheel if I hovered over it… Nothing else worked, I used Magic SysRq key and ‘o’ to shut down. That sounds like it was a desktop error and not a Firefox error to me.

Tomorrow I will start with the manual v3xx recommended and get Virtual Box installed and hopefully W7 Pro. Do I need to grab all the drivers for this laptop to install in the VM after W7 is loaded? Probably in the manual, but thought I would ask just in case it is not.

Life is a learning process and I love knowledge.

Install virtualbox using the software boutique. That manual is a good read, but I expect you will have lots of questions. Post back when your ready

Virtualbox does not show in my software boutique. Only Virtual Machine Manager.
Which does not sound the same.

Apart from any real-world peripheral devices you may decide to connect to your VM, you will not need any drivers. The VM uses standard Intel virtualised components and so Windows will able to handle them with its own on board drivers. This goes for the VM network connection as well. If your host has internet connectivity, be it wifi or ethernet based, then your VM will piggy-back on that connection. Inside your VM, it will just appear that you have an ethernet connection to the internet.

It should be directly below Virtual machine manager. See below: 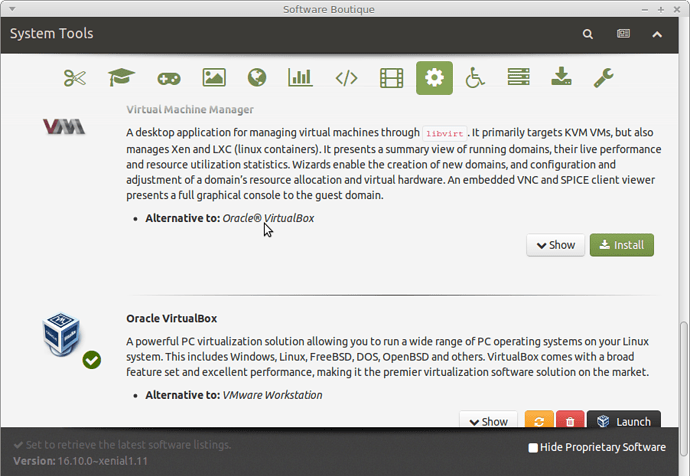 Are you using the standard Ubuntu Mate 16.04 LTS?

Also, if you have not already done so, check the "set to retrieve the latest software listings" checkbox in the bottom left hand corner. Then close the boutique. Then open a terminal and type:

Then re-open the boutique and navigate back to where I have provided a screenshot.

Just another experience. To be sure that All the needed packages or dependencies are installed, i always install it with Synaptic Package Manager who allow you even to choose available version (5 is current stable version i guess)
Of course you can do this in terminal by first searching version
apt search virtualbox
then choose and install
sudo apt install virtualbox_my_version
check out if all the dependencies are there, maybe i am wrong but virtual-dkms is important (as far as i know)
press y and accept
et voilà !

I recently moved to Virtual Machine Manager. There are pro’s and cons to either system.

I’d be interested hearing what you consider to be Virtual Machine Manager’s selling points. I’ve never tried it but am open to being persuaded.

Virtual Machine Manager (virt-manager) is an interface to libvirt and Qemu. It creates .qcow filesystems which I can copy, replace, take with me without any hassle. But that’s not what sold me.

What sold me is that virt-manager starts a virtual machine and uses a viewer to connect to it. This means that whenever I close the viewer, the machine still runs. Why do I need a view if all I need is a simple webserver to create a webpage? Otherwise there is a window open that I do not really use, all it shows be is a login prompt

And when VGAPassThrough is enabled it uses my physical GPU not the drivers from virtualbox. The actual visualization is done using KVM, but you could also use it for Linux Containers (LXC). It offers a lot more possibilities to play with and learn.

But as I said, it is a personal preference.

Are you using the standard Ubuntu Mate 16.04 LTS?

Also, if you have not already done so, check the “set to retrieve the latest software listings” checkbox in the bottom left hand corner.

My bad, I did not ask for updates and sure didn’t do the terminal commands. Sort of strange to have a three step process to do one thing. why is it done like that? A NOOB wouldn’t know to do that last two steps, at least this one didn’t.

I am finally up and running. Somebody severed the fiber optic cable at 7:30AM from Portland to Seattle, my gateway to the world

So that is a shortcut around boutique and it will download the file and you double click to install?

I am trying Door A, upgrade boutique, run two terminal commands and back to boutique. Are the instructions for installing W7 in the doc v3xx provided?

Remember NOOB at the keyboard.

VB is now in the boutique menu like you showed. Installing now.