It's almost the end of March 2021 - spring flowers and April showers are on the horizon!

Thank you to everyone who has helped us with previous testing for 21.04, including the initial ISOs.
We can't say enough how important the community contributions are during these testing periods.

This testing week is focused on the Beta release on April 1, which is no joke!

Final release is four weeks away, on April 22. 21.04 is an interim release, and will be supported until January 2022.

And if you've been nervous about testing, now is a great time to ask for help and join in! Chat with other testers on IRC (#ubuntu-quality on Freenode) or Telegram (Ubuntu Testers). Testing doesn't require any coding knowledge, can take as little as 30 minutes to complete a test case and file a report, and can be done on a VM or bare metal with a spare machine. 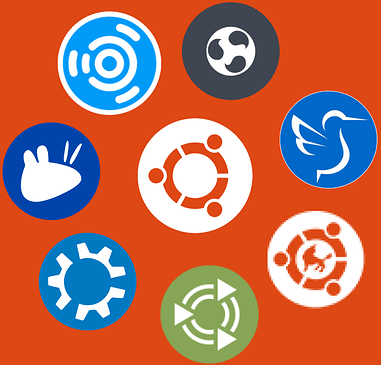 While we don't have have the Ubuntu MATE 21.04 Release Notes available at this time, we will update this page once they are online.

There have been several updates to Ubuntu MATE packages for release in 21.04 as well as the underlying Ubuntu base packages. There are some major changes coming in this release, in addition we would like some testing focus on:

About arctica-greeter we already have bug 1910279. It needs reaction from upstream.

ISO testing maybe done by running them in VirtualBox or in QEMU with quickemu.

Hello MATE Team. I know i'm late to the party but here are some of my results testing the 20.04. I hope it's useful to you in some way. I tested it on a VM(Gnome Boxes) so i don't know if these are reproducible on real machines.

These are the specs of my VM 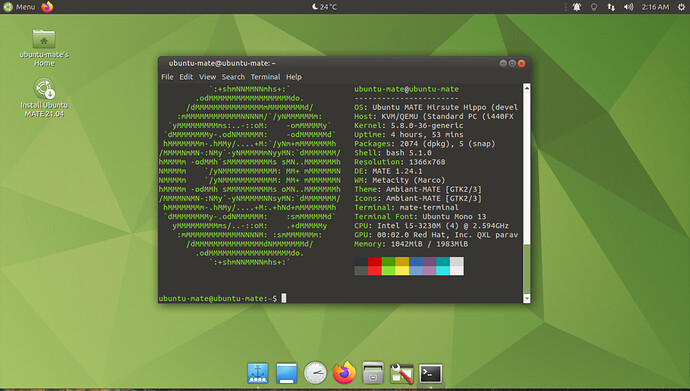 Which leads to my next point:

Again, i don't know if these errors can be reproduced on a real machine but that's all i got while testing 21.04.

Thank you so much for your hard work, i really enjoy Ubuntu MATE and only want it to get better and better. It's been my daily driver since 16.04 so i really like the distro. With that said, let me know if there's some info missing or anything. Have a nice weekend folks

So I tried this in a Virtual Machine in Oracle VirtualBox 6.1.18 on a MacBook Air running the latest version of Big Sur, I encounter a fatal error when I try to log in to the desktop. This happens after I install the Virtualbox Guest Editions CD image.

The desktop remains black after I successfully input my password, and it stays black for hours. So I tried to reinstall the desktop environment from the root shell in GRUB, no errors. I tried to log in after that, then I encountered another error, but this time I think I have encountered my first kernel panic.

Quick noob question about these test images: assuming I am aware and OK with using a test image as my as my main OS (to try out the latest and help report things), is it safe to assume that once the release is official my computer will be up to date and "clean" as would be an install of the final image? Or would there be a bunch of buggy clutter left over from the development phase that would justify another wipe and install?

If you install a daily of any release (eg. hirsute), and upgrade it normally (eg. normal sudo apt update to update software lists, and sudo apt full-upgrade to upgrade packages), it'll become 21.04 a few hours (even day or so) before the actual release (which I think of as the release of the official ISOs).

This late stage of the process I doubt there would be any clutter, though it's always possible (I wouldn't expect any).

FYI: My actual install was back in the artful (17.10) days, upgraded every 6 months so now on hirsute but next month I'll bump to the i-something release as is usual. In theory I'd explore my system looking for orphaned packages after a release has gone EOL, (eg. once groovy is EOL, I look for groovy packages) which can be somewhat easily detected using ubuntu-security-status etc but I don't always do it; I've not found it a problem. My 2c anyway

Is it possible to perform an upgrade from Groovy to Hirsute with a live USB or ISO image file?

Thanks for the response. I have definitely run the late stage beta images and had them turn into the regular release without issues. Just wasn't sure if the dailies would be trickier.

I faced the following issues:

With two keyboard layouts I get –

Steps to reproduce: 1. Download Ubuntu MATE ISO (20190830 in this case) 2. Boot it and select OEM install 3. Install the system, reboot and login to it 4. Click on "Prepare for shipping to end user" 5. Reboot and follow oem-config wizard... 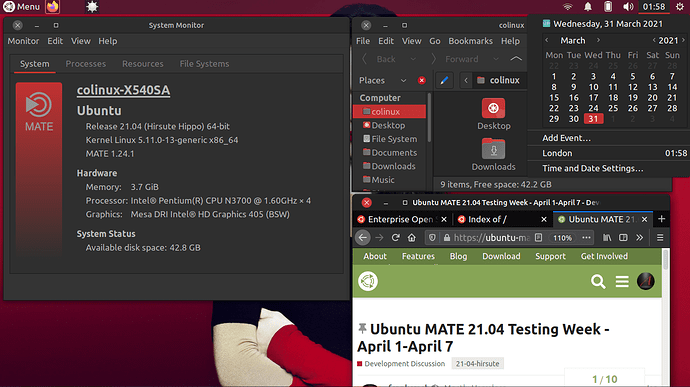 Still problem with the i18n of the Ayatana-indicators...
I saw somewhere the package and it was newer than that of the daily ISO, I mean there is more languages in it.

Hello, in Ubuntu daily I have to indicator session texts in English where it's 100% translated and it was in my language, Occitan, in the previous versions. Now I have "lock" "About This Computer" and something about MATE Help. How comes? Best...

We would prefer that you test on the current daily image, which is linked in the OP. 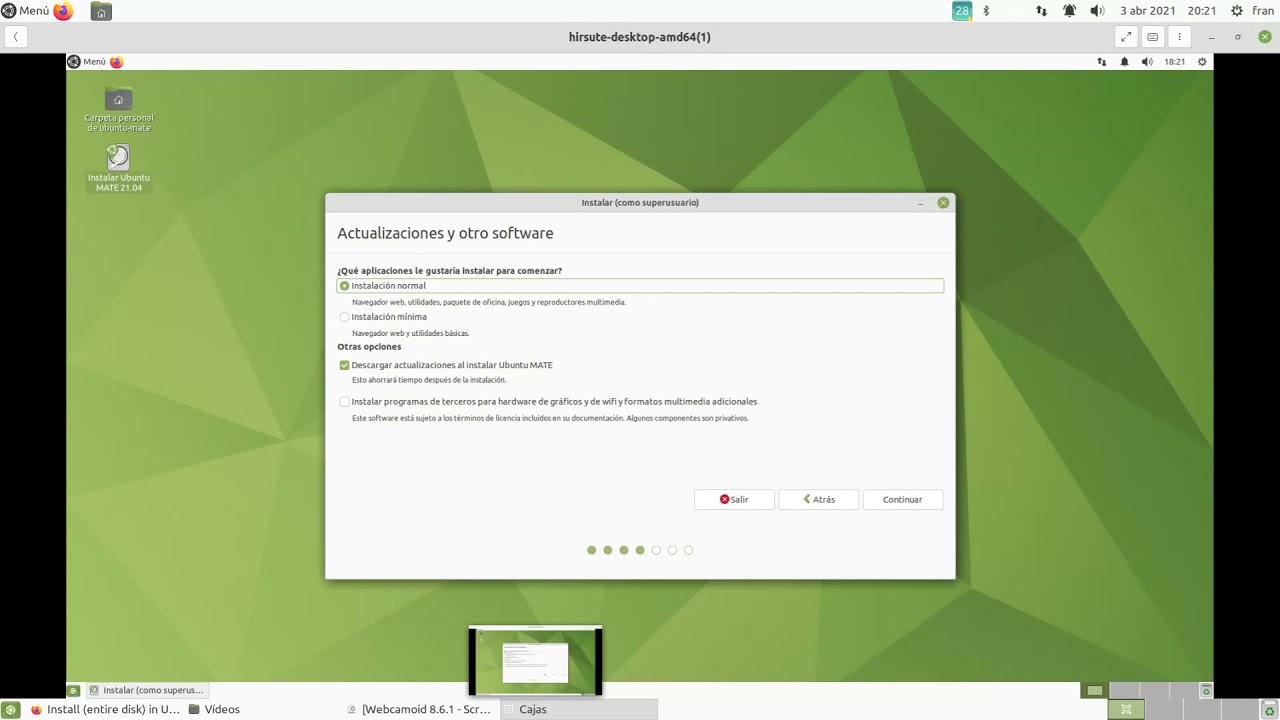 I have reported two bugs:
#1922447 Wellcome to Ubuntu Mate slideshow is not entirely in Spanish

Here's what Brian Murray commented on the bug report.

This is because the redirect at ubuntu.com to the release notes has not yet been setup.

Sorry to insist but French has an issue too with these indicators...
Could someone please synchronize the translations?

Apologies if I post this in the wrong forum but I deem this as highly critical really want to bring this to the attention of the developers of ubuntu mate.

Can anyone reproduce this behaviour with the above two releases for me?

Am able to login just fine with the latest LTS release. But I don't want orca to be falling behind here. As I just like others, want to be using the latest and greatest in software!

Thank you for reading.

What is good - the Arctica Greeter on upcoming 21.04 can be replaced back to Slick Greeter by using the method for 20.10 manually if Orca is essential.

the extension caja-admin, present on a rather visible menu, cannot be translated either on launchpad or transifex.
There are 16 languages in its Github repository, when MATE desktop holds 159 languages in its transifex project.