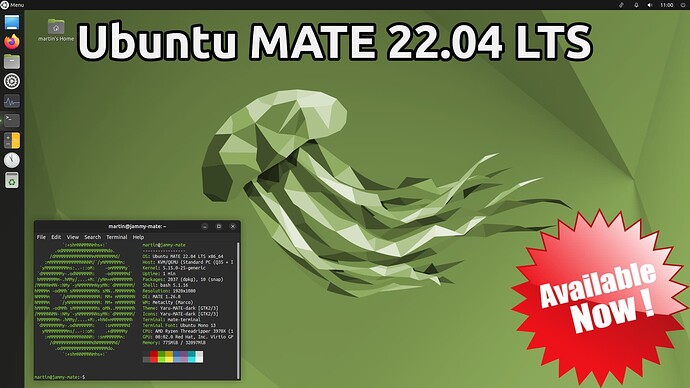 Check out the release notes for all the details and download

Some highlights in the release are:

Ubuntu MATE 22.04 LTS is the culmination of 2 years of continual improvement 😅 to Ubuntu and MATE Desktop. As is tradition, the LTS development cycle has a k...

will this release have wayland support?

Ubuntu 22.04 uses Wayland by default, so it must be supported, and is likely the default? I wonder why it was not mentioned.

I saw earlier that it won't be HUD in new releases of Ubuntu Mate. And it's still existing. It's a good news.

Superb. Thanks for all smashed bugs, @Wimpy

I switched to MATE a couple of years ago owing to its classic desktop: Menu in upper left corner, ability to put FF, TB, Home & Terminal launchers across the top. I am not a sophisticated user, but very pleased with MATE. I hope that the newer MATE can easily be configured to continue with the Desktop I am used to versus the newer format. I believe what I like is called the "classic gnome desktop". (for whatever reason, I do not like having icons docked on the left of the desktop)

My wife has been running the beta since late March, she is a basic user and everything has "just worked" for her. She had been running Mate 16.04 previously.

Use mate-tweak to choose "traditional" and I think you will be very happy.

I've got the beta installed on a new i9 build and I've had no issues with it either, but my third party tools are not yet supporting 22.04 so I haven't been able to do much with it other than basic web surfing.

So far I've found the 22.04 beta to be in much better overall shape than was 20.04 during its entire first year.

You can not run MATE Desktop on Wayland. All the apps in the MATE suite are Wayland compatible but not the desktop session.

I was looking forward to this version, which is really packed with new features and improvements ... now I have to study the release notes thoroughly !!!
giving the possibility to have snap flatpak appimage enabled by default in addition to ppa is an excellent thing, because the user can choose the one that is best for him ... and for this to remove the possibility of having firefox (or chromium) installed as deb that was a drawback

the only complaint i have, really, is the green opening splash screen; i am red/green color blind and we 5% odd balls do not gravitate to greens or browns. we see bright reds, blues and other colors - given a choice i would select blue or a red version (hue dependent) for the opening screen. just a very, very, minor complaint!

This is a feature not a bug for me, until Wayland 100% supports CUDA, it is useless to me. I need to be able to install CUDA and use it, not chase down potential Wayland issues. CUDA versionitis is more than enough headaches as it is!

Very good release enough backward compatibility for old applications (like the good old original working gksu !! )
and at the same time possible to install gtk4 apps.
The Gimp in the repos can run older plugins, such as heal selection after installing some third party debs.

Only big mistake is the window borders on default theme and installed snaps. These two bugs i can fix after install rather quickly. Also tbe decision to remove mate themes is very disappointing.. Apart from these few issues great release..Very good job. One of the few releases alot runs out of the box already correctly . Very good system. I recommend everyone to try it out

After installing, neither Firefox or Chromium could reach reach any sites. I know Firefox switched to a snap package in this release. I had the "Wired connection 1" set up to use CloudFlare for DNS with the following servers: 192.168.2.1, 1.1.1.1, 1.0.0.1. I copied those same servers to the docker0 connection, and now all Internet servers are resolving. I don't remember if I had the docker0 connection before the upgrade.

ubuntu mate 22.04 is as close to perfection as any OS I've ever seen

mate 20.04 english->browser works after reboot and after freezing at first reboot.

mate 20.04 romanian-> any browser freezes. i uninstalled and installed again.. i switched to english and installed languages. no change. when I start the computer an error popup appears asking to report it. This was an ubuntu upgrade from 18.04.

Should I install a fresh copy or wait for a fix?