How to change login screen background?

Sorry if this is not the right place for this, but I was just wondering how I can go about changing the Login screen background? - I assume I can just replace an image file somewhere on the file-system?

Thanks in advance,
Bobby

Thanks very much for your reply, I’ll give that a go

2020 and now the first item in the Control Panel under Administration is "Login Window". Very user friendly.

It shows you the path where the images are coming from if you want to add one of your own. Only catch could be making sure everybody has permission to read the file.

item in the Control Panel under Administration is "Login Window"

May 2022
Now under UM 22.04
Can't figure how to change login screen background
And there is no item in the Control Panel under Administration named "Login Window"
I've looked through other posts, used a few 'tricks' recommended, but no use.
What is it that I am missing ?
Thanks
W

Some things changed under the hood which resulted in a bug.
See this:

arctica-greeter does not honor gsettings changes

The new arctica-greeter being used in Ubuntu MATE 20.10 does not allow any chang…es to its settings/theme. Both the direct edit of `90-arctica-greeter.conf` file and changes via gsettings/dconf-editor do not get desired result. There is a [bug](https://bugs.launchpad.net/ubuntu/+source/arctica-greeter/+bug/1900633) on launchpad. I would like to add that it is not specific to Ubuntu MATE. Same issue exists on LinuxMint if we install+enable arctica-greeter.

and the "won't fix" answer of the author.

so you have to edit a configfile manually:
sudo pluma /usr/share/glib-2.0/schemas/30_ubuntu-mate.gschema.override

and change the background= entry

This seems to be the accepted workaround for the time being.
It lacks a bit in elegance I'm afraid. But it works pretty well.

Not that I know, I am eager to know if there is any.

At the moment I use this:

from now on I only have to click the file whenever I want to change the background of the login screen.

Yeah, it's not ideal but it's at least a decent workaround for the time being.

Zenity is very limited in functions. I prefer Yad dialog.
However Debian still packages ancient gtk2 version of yad,
bullsye having 0.40.0-1, bookworm/sid have 0.40.0-1+b1,
which is binary NMU (Non-maintainer upload) since there is +b suffix at the end.
There is a bug report but not addressed. https://bugs.debian.org/cgi-bin/bugreport.cgi?bug=919785
And Ubuntu pulls from Debian.

Current Yad version is 12 on Github. Releases · v1cont/yad · GitHub
Anyway even with such an old version much more can be achieved with yad than zenity.

I like yad , it can do multiple things in a single window, it is indeed a major enhancement compared to zenity.

One step beyond yad is gtkdialog which can be used to build complete graphical interfaces.
It has become abandoned, picked up again, forked at least three times etc. so although it is a pretty good interface for bash scripts, and I really love it, its future is uncertain.

The only reason i reverted to zenity for this hack is the fact that it is already present on every Ubuntu-MATE install so nobody needs to install extra packages to get this running.

I had some thoughts about doing this in gtk/glade + C or wxglade + python but that is a bit much work for what I consider as a temporary stopgap. Also a bit harder to post in the forum.

It would be much less work to revert to the old tried and tested slick-greeter.

I have figured it out how to change the Boring Login Screen in Ubuntu Mate 22.04

Check the picture and you will see the path and with image file should be changed in order to have a nice login screen once you log out.

Just change the image with maintaining the same image file and enjoy... 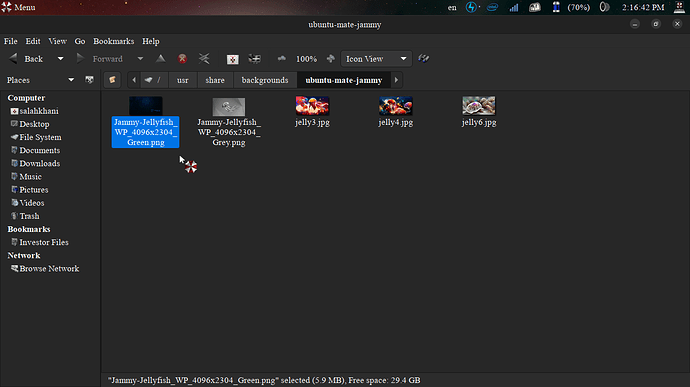 seems too easy! But I'll try it!

This solution is working for me, thanks!

Yes, it works. Thank you very much.

It works for me, thank you!

It didn't work with a .jpeg image all I got was a black screen, but I saved the image as a .png and then it worked.

been told that the file is included in the default Jammy wallpapers, so if that gets updated, your changes will be lost and image will revert to the original one.