Can someone confirm how to make Ibus and synapse work together. (actually test it).
If you add IBUS in language and support, then it crashes the whole Synapse.
I need to get both of them working in order to use my system properly.
The first problem is the starting conflict. CTRL SPACE.
but that is not the problem. When this is changed for Synapse, the crash still exists.

I had a post before that did not give me any help.

Hello, I installed ibus so I can type pali (language for Buddhists). 1. Synapse is broken now. I uninstalled ibus, but it makes no difference so I reinstalled it. 2. I saw a bug for this in lp but I do not know how to set IBUS_NO_SNOOPER_APPS 3. I also want to set a custom file as stated in http://www.ubuntu4u.com/howtos/how-to-type-romanized-pali-and-sanskrit-in-ubuntu-12041210 but the directory does not exist anymore. Any help on this would be good.


and I found this one which did not have the file that fixed the problem for another.

@lah7 many thanks first of all. The solution you provided is in part right but need to be completed further. To fix temporarily the issue, I replaced "Exec=synapse" in /usr/share/applications/synapse.desktop with: Exec=bash -c 'GTK_IM_MODULE="" synapse' and it works now. If I want synapse to open at login I have to add: bash -c 'GTK_IM_MODULE="" synapse' as a command in Startup Applications (eventually also in the Main Menu for when it is launched via the Applications menu). …

The last time this bug happened, the only way to fix ths was to reinstall. I do not have the time or effort to do this again. It also costs money to do this in Myanmar (internet is quite fast these days, but they charge per mb instead of minute now).

I can’t test it for you as I don’t have an Asian keyboard, what I must ask is; do you have all the relevant language packages installed for your system as this might be part of the problem?:

How to change the language settings in Ubuntu Tutorials & Guides

Hi, to completely change your system language from one to another; go to Control Center > Personal > "Language Support" then click on Install/Remove languages, make sure that the only language in the list is the one you want, example: English. Take the tick out of any unwanted languages and leave only one tick in English!!. This is my own guide using German as my example. Open language support in the Systems Settings menu and click on "Install/Remove Languages" then put a tick in the box f…

I did not get that far for keyboards. I simply changed the setting from none to ibus and it crashed my synapse. That is all you need to test my bug. Then you will see it. Ibus works on ctrl + space so change the synapse hot key before setting ibus. But they crash for other reasons. I hope you can help. I need ibus to work (later I will install some other keyboards and hindi composer too).

Do you have the correct input set in Language settings?, it should be on "IBUS" which isn't installed in Ubuntu mate 16.04!.

"XIM" is the pre-installed default!: 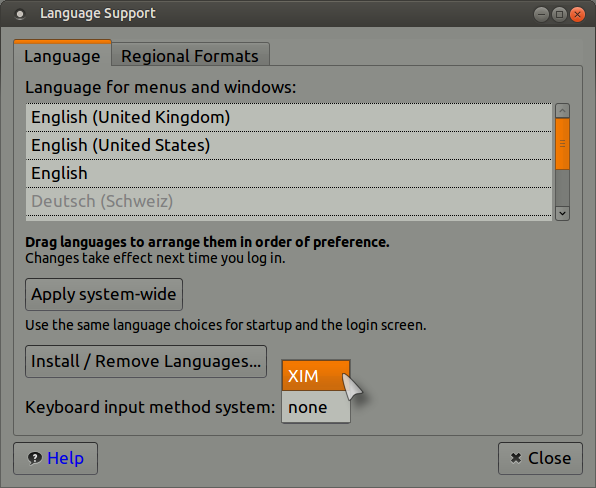 To install ibus via the terminal, use the following command (Ctrl + Alt + t):

install ibus select it and then see what happens to synapse after booting twice. make sure that synapse is set to autoboot

install ibus select it and then see what happens to synapse after booting twice. make sure that synapse is set to autoboot

Edit
Installed ibus and autoboot and rebooted three times without issue, however I do see errors in 16.10.

So i installed zeitgeist

Did you select ibus in the language and support dialog box before rebooting. Then did you try to launch synapse. . However, I think you may need to change it to < ctrl + alt + space> or something else… like super key…
Synapse should have autostart selected in the preferences too. This will allow it to listen for the key sequence to launch itself.

Then when you launch synapse… you need to type something for it to crash. Perhaps I was not clear… If synapse is working you will see a list.
Follow the launching typing synapse steps 2 or three times. If you can confirm that 16.04 is ok with the updates given… that would be better, because I need this on a stable system. I only have 32 gb total on my sdd. and 17 are for windows which I almost never use, but sometimes for balabolka and maybe something else… not sure… maybe a cannon printer whent the need comes.

I installed IBUS and set Synapse to auto start and I have no problems here, it does what it is supposed to do!.

Maybe you have some missing dependencies?, try the following terminal command which might help fix the problem:

Is that with 16.04 that you are talking about “no problems” or 16.10
DId you select it in the language support box?

And yes!. I did select IBUS in the language box!.

Is ibus selected in language and support box too? and then you rebooted? and tried ctrl space.

ok I will try right now… I just did an update too.

Is ibus selected in language and support box too? and then you rebooted? and tried ctrl space.

Yes it was all selected as you asked, I don’t see any problems here, did you try the command?.

I am still afraid… just rebooted… Just want to make sure… so there was no conflict with ctrl space or did you change the key to launch synapse?

I used Ctrl + Space and it worked fine!.

Well… I set my launcher of synapse as ctrl alt space and now synapse is dead again. I am not a happy camper. Perhaps I have some burmese installed. i do not know. I might guess this is not reproducible. Last I checked I could not fix this unless I reinstalled. I might try creating a new user, deleting my user, and then creating my old username back again.

did you type… I can launch synapse but if I type it does nothing. I set it back to ctrl space… still no hope. I have been down this route before

Maybe it has something to do with how you created your boot media?, did you follow this advice?:

Hi all, as the title suggests, some and/or many problems with your installation can be avoided by burning the ISO file at the "SLOWEST POSSIBLE SPEED", most if not all burner apps will automatically choose the fastest speed available for your disk burner drive so it is important before you commit to burn a CD/DVD that you select the menu tab which controls the burn speed and select the lowest number on offer. Your burner drive may well support a burn speed of 20 X for DVD and 60 X for CD's a…

You said this before… I downloaded an iso from the net. and installed via usb. no dvd rom on my laptop.