Rohith Madhavan has made an Ubuntu MATE 15.04 image for the Raspberry Pi 2 which you can download or build yourself.

The image is functional and based on the regular Ubuntu armhf base, and not the new Snappy Core, which means that the installation procedure for applications is the same as that for the regular desktop version, ie using apt-get.

We have done what we can to optimise the build for the Raspberry Pi 2 and one can comfortably use applications such as LibreOffice, which in fact is a joy to use

But the microSDHC I/O throughput is a bottleneck so we recommend that you use a Class 6 or Class 10 microSDHC card. If you build the image yourself we recommend you use the f2fs file system.

You'll need a microSD card which is 4GB or greater to fit the image. The file system can be re-sized to occupy the unallocated space of the microSD card, similar to Raspbian.

NOTE! There are no predefined user accounts. The first time you boot the Ubuntu MATE 15.04 image it will run through a setup wizard where you can create your own user account and configure your regional settings. 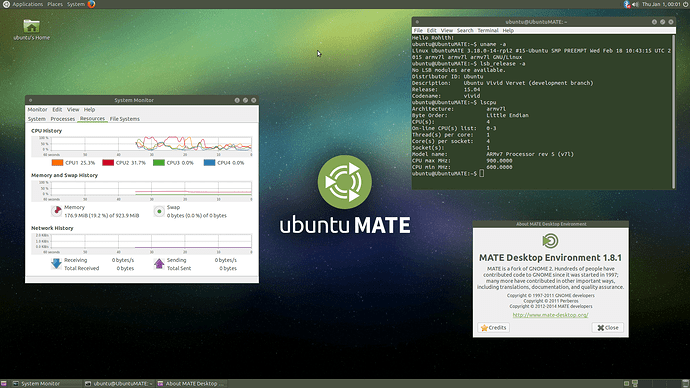 The drive may be mounted on any /dev/sdX so use the command lsblk to
check.

NOTE! Currently these scripts will only run on an armhf device.

Edit build-image.sh and change BASEDIR. Then run the build.

This will take a long time, so I suggest you start this running before you go to bed.

There are no utilities included for automatic file system re-sizing. However, it's not hard to do manually. Once booted:

Delete the second partition (d, 2), then re-create it using the defaults (n, p, 2, enter, enter), then write and exit (w). Reboot the system, then:

You can select which audio device omxplayer should output audio to.

The sound will output to HDMI by default if both HDMI and the 3.5mm audio jack
are connected. You can, however, force the system to output to a particular
device using amixer.

Please post all feedback on the dedicated community topic. If you have any improvements then please submit a pull request to our BitBucket.

13 Likes
Ubuntu-mate+Kaffeine=no picture or sound
Would be there a version of Ubuntu Mate for Raspberry pi 2
No sound output/drivers HDMI or analogue - Raspberry Pi 3 - only with Ubuntu MATE installation
1080p monitor not recognized on Pi 3
HDMI on RPi UbuntuMATE
Bakaniko 7 March 2015 22:09 #2

If you also highlight the issues we can see what we can do about fixing them. Looks like we might be able to offer community Raspberry Pi 2 images in 15.04

If we get that far, I can provide hosting.

Fabulous work @rohithmadhavan, looking forward to testing the image on my Pi2

can you build Ubuntu MATE for the Banana Pi too? that would be amazing!

HI,
@rohithmadhavan
Nice to hear that the img is available.
I don’t know for the sound but i guess i can be easily settled with all the community around the Pi.

For the choppy video, was software do you use ? For it might come from the proc as it is not enough powerful.
For example, on odroid C1, we can’t use VLC since it doesn’t support hardware acceleration yet (they are on it).
So we use kodi who fully use it (and it is an amazing software on that kind of computers).

Thank you so much for the image. Trying…

@Bakaniko Thanks for the suggestions

I used VLC for the video playback. I ran Openelec (Kodi) previously on the Pi and it can handle 1080p playback without any issues. In fact, the Raspberry Pi 1 also is capable of the same since they have the same VideoCore IV GPU. You’re right, the GPU is not being used. I will try to look for a solution…

@rohithmadhavan
I just found this article:
How to get Ubuntu desktop on the Raspberry Pi 2

I might be an other way to start. I guess some people from here can make test.

This is great, especially as it runs Libre Office. I tried an Odroid last week but couldn’t get Libre office to work well on it, so Maybe I will buy a Pi 2 now.

I am hosting the file. You are welcome to link it if you want. I have a 100Mbps connection.

I can host the image.

@kkasberg Thank you very much

I’ll link it to the topic…

What do you think ?

@Bakaniko There are already a lot of torrent websites where the image is available, but feel free to add it wherever you wish

I have hosted it here. I have unlimited bandwidth, so go for it
http://kingitconsultingco.com/FTP/2015-03-07-ubuntumate-vivid.img.gz

thanks for this , really cool alternative to raspbian. Is there any chance of getting the kernel source? I am particularly interested in getting the headers so that I can compile quake3.

@millerthegorilla This image uses a patched version of the Raspbian kernel. The kernel source is maintained by the Raspberry Pi Foundation and is available on Github. Pre-compiled binaries are available on this page.

Any one else experiencing lag when using this? Or can i do something about it?

Some lag is normal with a microcomputer.

Though I just set mine up and found the drop down menu to freeze up before I could find tilda. Still pretty wonderful though. I’m writing to you now from a raspberry pi 2 running the above image. Great work guys. I’m going to try to build this out as an edubuntu box for my nephew.

Is there something like raspi-config for this image? How should I get rid of the overscan?